The crew of Junkluggers were given a large task by client who had multiple items in their house that consist of 5 bedrooms of multple furnitures, a living room with a large piano, kitchen with smaller items such as chairs, a garage with dressers and heavier cabniets. The challenge that awaited the team was getting the items out of each bedroom without any scratch towards the room itself or the items as well. Other obstacles that the team had to face was the weight of the piano being heavy for 2 crew memebers without dragging it out of the living room and leaving damage onto the carpent. Finally there was multiple cabniets that needed to be disassemble in order for the team to carry it out of the bedroom.

The crew predicted that the job would at least take 3 days to finish moving out the furniture and onto the truck to be donated. The team started day 1 consisting of two members and moving out the bulkier items from the garage and bedroom. These items were placed in the truck in a way where they wouldn't fall or be damaged by the movement of the truck. The team filled the whole truck on day 1 and would continue onto day 2. On day 2 the crew now consited of 4 members have strategized a plan to finish this job earlier. The crew rented a rental truck to place the piano and much of the heavier items there while the other truck would be for more small/medium items to be taken away. Right away the team focused on the upright piano by lifting it off from the living room, then by placing a dolly underneath to roll it onto the rental truck without damaging it and the living room itself. The team then split up in each bedroom to dissassemble  each furniture/cabniets for it to be taken away from the bedroom without scratching or damaging it. The team would work on this for a few hours until they placed everything outside and then eventually place everything onto the truck. Once the truck was filled up we had 1 member take it away to donation center to have the items donated and then recycle the left over items. When they came back we filled the remaimg items that was left onto it as well as the rental truck and managed to finish this job which was predicted to be done in 3 days only in 2. The client was very satisfied for the team to be constantly working hard, and to have more accesibility in their house. 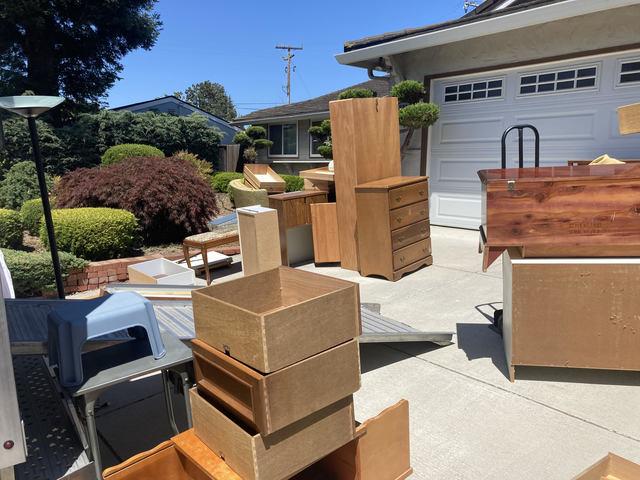 The multiple items that needed to be disassembled to be taken away.

Back to Previous Page
Back to Case Studies

We serve the following areas

The Junkluggers of Greater San Jose